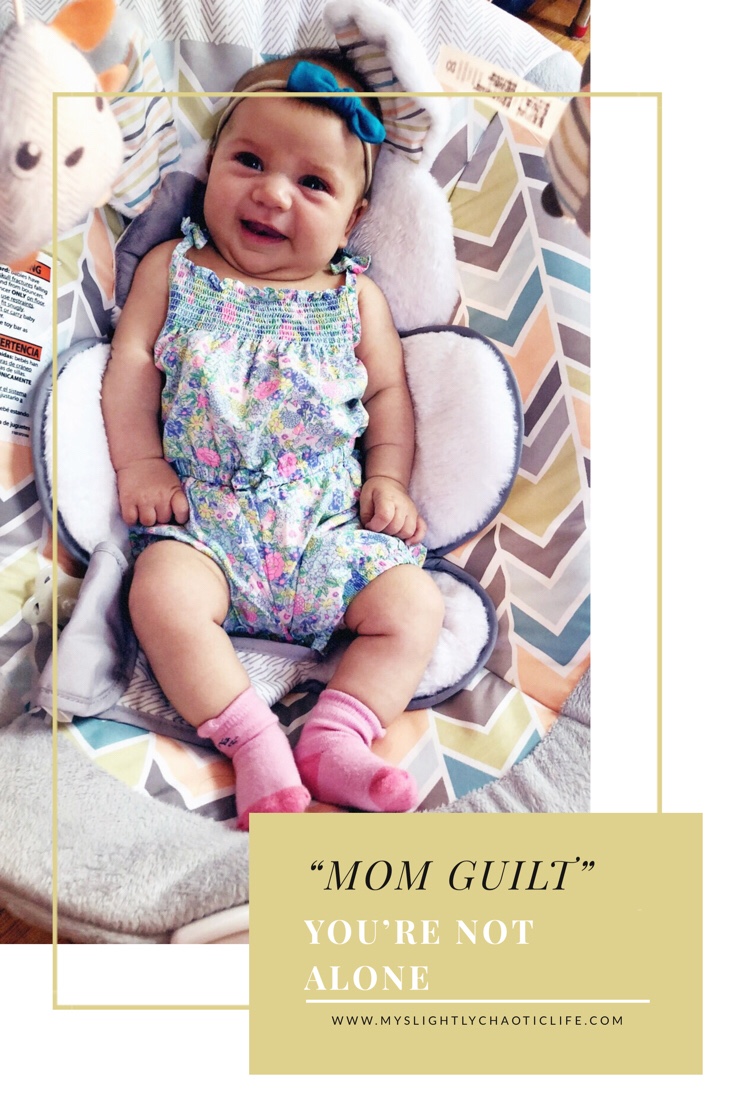 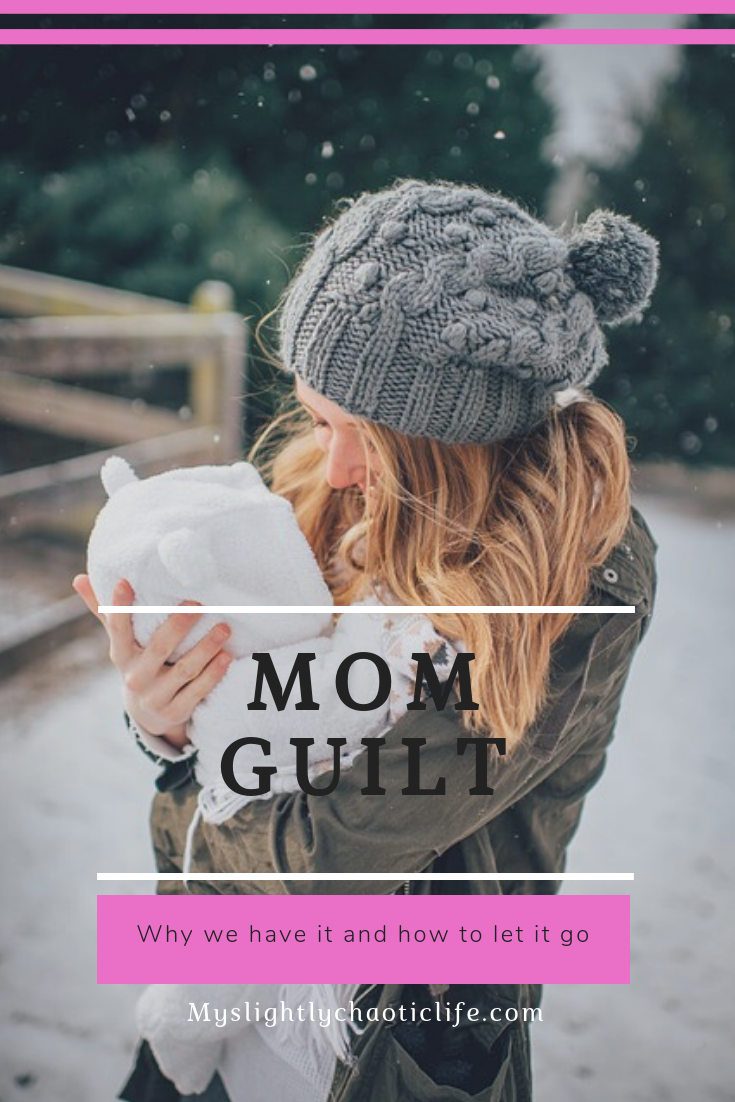 Mom guilt. We all have it or have experienced it at some point. I just recently experienced this mom guilt when I was heading back to work after the birth of my second child. I was chatting with another mom who was pregnant with her second child when I asked what she did for work. She replied “I’m a stay at home mommy.” I exclaimed “oh, that’s so wonderful” and looked down letting the guilt wash over me. Here I was about to head back to work, leaving my 3 month old daughter behind as well as my 6 year old son who had just gotten out of school for the summer and I was excited about it. I was excited to go back to my job as a nurse because my work full filled me and challenged me and being a stay at home was just not for me. In fact, I wrote any entire post on 5 Reasons I Could Never be a SAHM.

This experience got me thinking about the times that I have experienced an overwhelming sense of mom guilt and as though I was the worst mom in the world. There are times I feel as though I am having a detrimental adverse effect on my children’s lives. As moms we will always feel some form of mom guilt one way or another. I wanted to share some of the few ways I have experienced mom guilt in hopes that other moms will realize that they are not alone in their feelings and we should start embracing that as moms its okay to be perfectly imperfect.

The time I had to have a C-section

As a first time mom I had an image of what my childbirth would be. That I would have an easy, beautiful medication free birth with my partner by my side rubbing my back and supporting me through each and every contraction. Reality set in when I was having excruciating contractions, begging for an epidural and staring at my “supportive” partner while he played on his phone. When Hayden’s heart rate dropped and the decision to proceed with an emergency c-section was made I felt like a failure both as a woman and as a new mom. My mom thankfully was there to not only support me through my c-section but to remind me that I was not a failure. In retrospect, this was a ridiculous way to feel but it was my first brush with mom guilt.

The time I went to nursing school

Right after I delivered my son I found out I was accepted into a nursing program. At this time in the State of Maine, nursing schools had wait lists that were a year or more for admission and I had already spent 2 years waiting to get to the top of the list. I, on a whim, applied to this highly competitive two year night program and was accepted. This meant that I went back to being a full-time student on top of working full-time and raising a 4 month old. I felt terrible leaving my son at night and on weekends to pursue my dream of nursing. Not to mention that my partner at the time was not supportive and spent every opportunity telling me how my pursuit of my dream career was taking time away from Hayden. 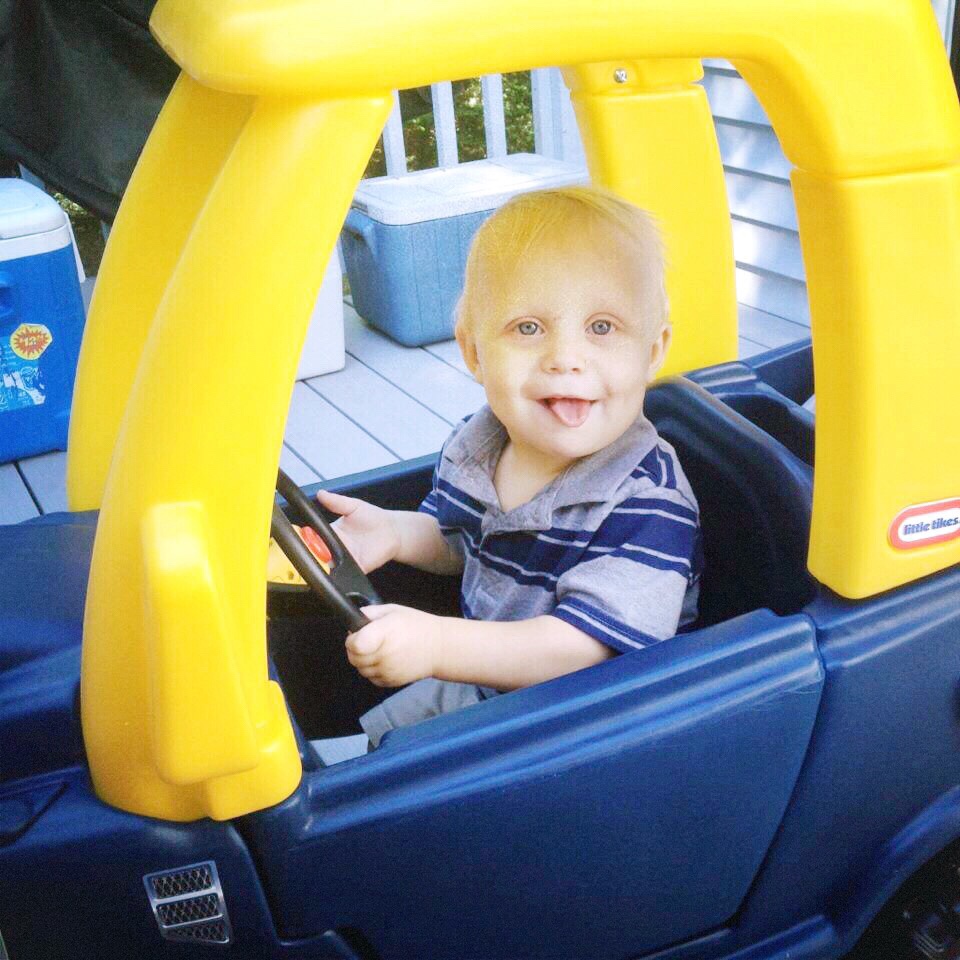 The time my son fell off the bed

Somehow I managed to survive the first 9 months of my child’s life without him getting injured. Until one day it was just me and him playing on a bed and he crawled too close to the edge and flipped off the bed landing on the floor with a sickening, to me anyways, thud. He immediately began screaming and my heart just about stopped. I scooped him up, tears streaming down his face as well as mine and just held him. What kind of mother lets her 9 month old child get so close to the edge of the bed that be back flips off of it? I felt like a monster and the mom guilt hit me like a ton of bricks. He was fine ultimately and as I quickly learned children, especially ones learning to crawl, walk, ride a bike are accident prone and there would be way more mishaps like this to come.

I don’t know about you but my child was the sweetest, nicest, happiest toddler there ever was. He would never, ever hurt one of his classmates at daycare. So imagine my surprise one sunny spring day that I went to pick up Hayden when he was about 1 1/2 years old from daycare that the owner pulled me into her office and told me the horror of all horrors; my child had bit another child. I felt terrible and wondered why my sweet, happy little boy was going around biting other kids. Come to find out that after researching this behavior (which I thought was surely a gateway to being a sociopath) it is a normal reaction for toddlers to bite or hit when they feel frustrated or their personal space is being invaded. This doesn’t mean that I hoped it would be a regular occurrence but I felt relieved that it was not the beginning of a serial killer. 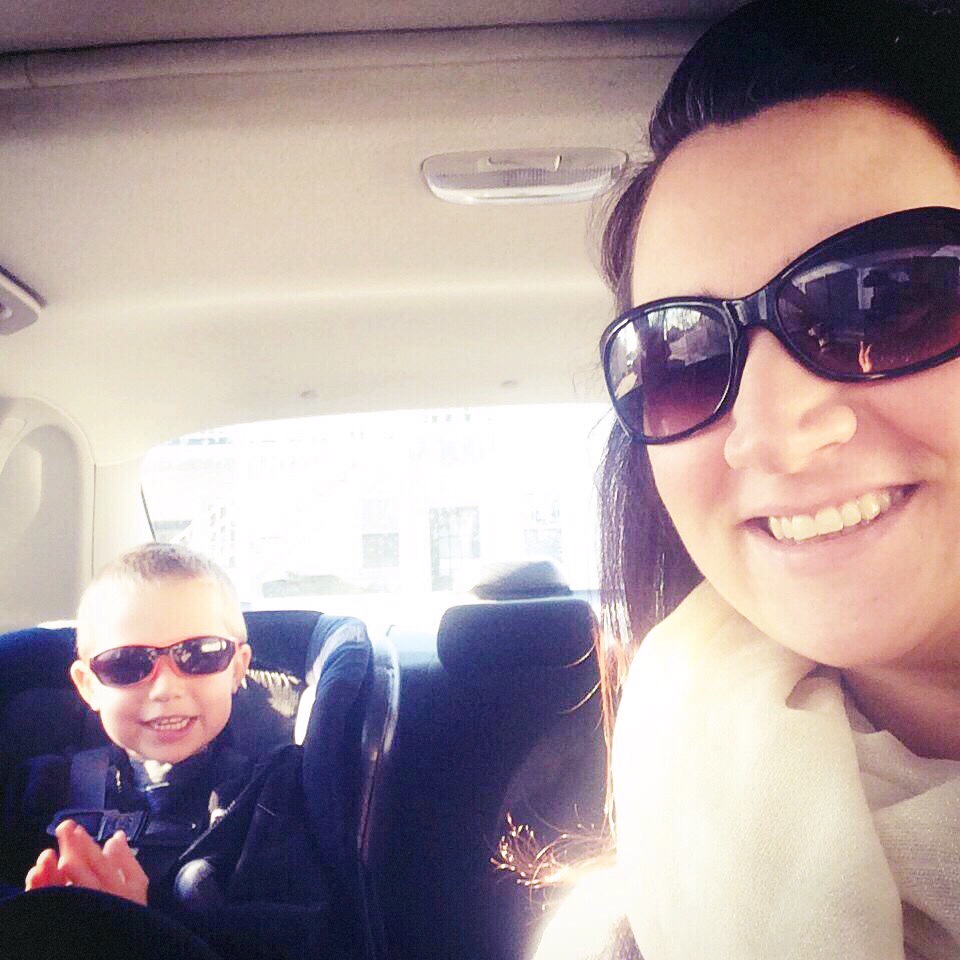 When my son’s father and I split up

Nothing is harder and causes more mom guilt then feeling like you are tearing your family apart. I felt guilty for having my son now be from a split household and was continuously reminded of that guilt by my ex-husband. I felt extreme guilt that I was choosing my happiness over my son having two parents who were together. Lastly I felt guilty for waiting so long to do it. My son didn’t deserve to watch his parents continue a toxic, unhappy relationship that was ruled by mental and emotional abuse. My son now has to struggle with going back and forth between two completely separate households. To this day, this is one form of mom guilt I can’t let go of.

When I started dating again

There is a tremendous amount of guilt that goes into dating again when you have a child. Am  taking too much time away from my child? Am I dating the wrong person that isn’t going to go anywhere? When do I introduce my son to him? What happens if after introducing my son to this man, we split up? All these questions run through your mind when you are jumping into the dating scene with a child. Thankfully I wasn’t in it for too long before Aaron and then there was no question on if I was doing the right thing or not. 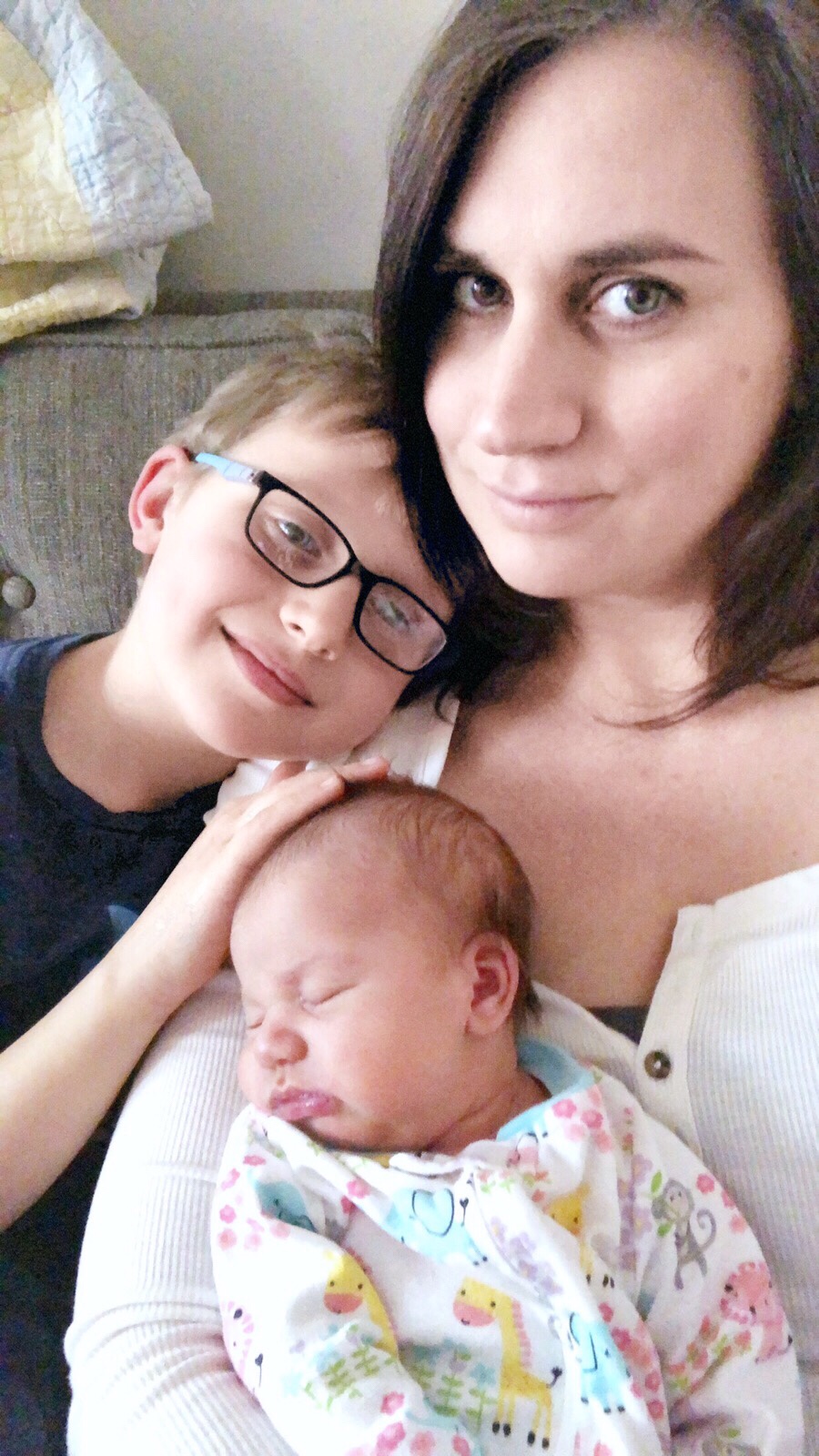 When I became pregnant with Avery

Hayden went 6 years as an only child. He had both my and his dad’s attention solely on him for that long and now I was going to introduce another sibling into his life. How would he feel? Would this new baby upset Hayden or cause issues with him? You feel guilty throwing another baby into the mix and how the focus would change from one child to another because babies take up all your attention for a while. This mom guilt while valid was unfounded when Hayden found out he was going to be a big brother. He was so excited and he loves his little sister so much more then I could have ever imagined. 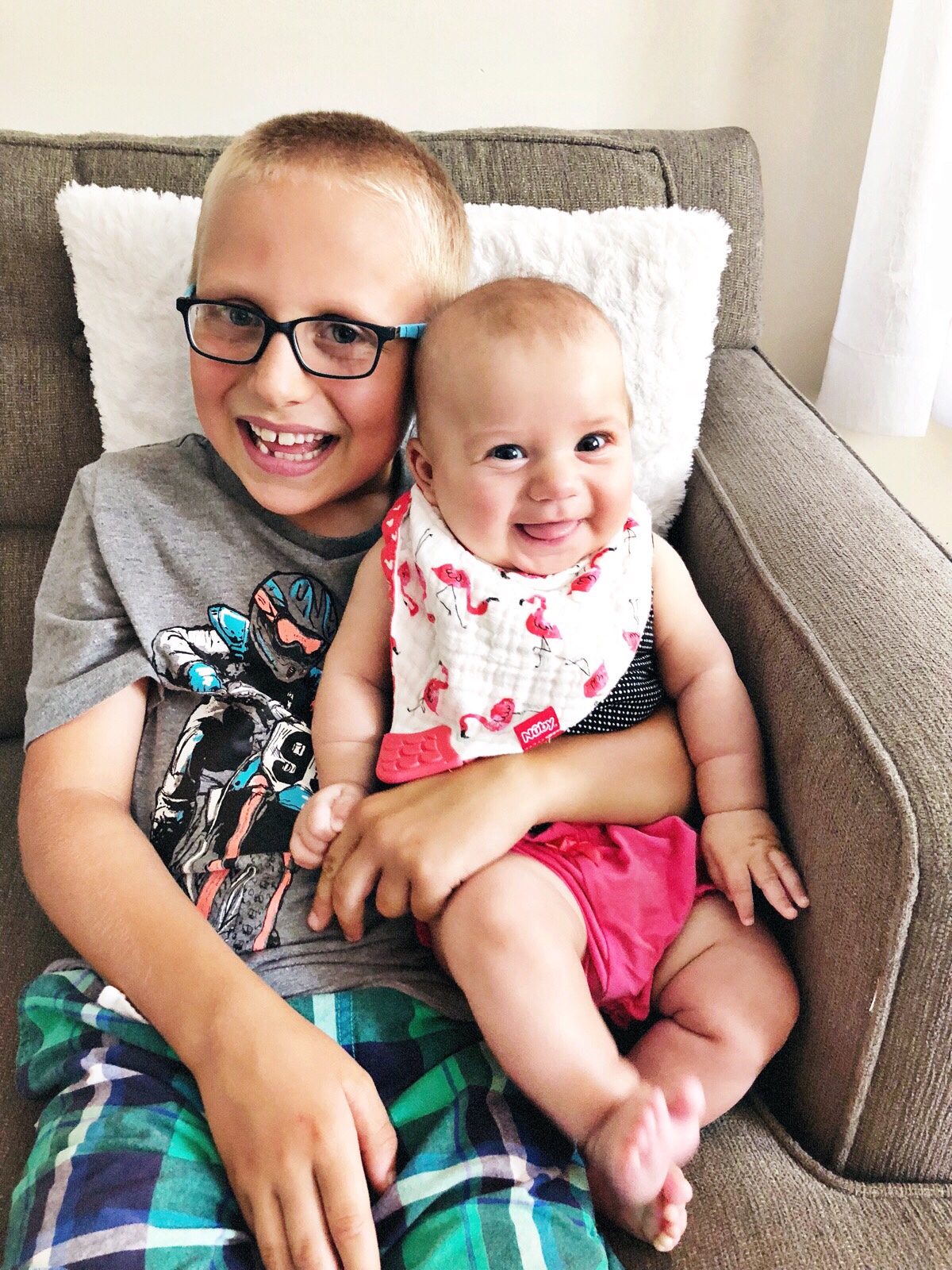 I hate that as moms we feel this way. I hate that society makes us feel terrible if we aren’t the perfect parent. Well I am here to say that it’s okay to not be perfect. Despite not being the perfect mom (because let’s face it: who is?) my children will always know how much I love them. So next time you feel “mom guilt” just remember it’s okay to feel this way and you are not alone and then let that shit go.

Twitter
Previous:
Taking Baby to the Beach? Tips for your Trip
Next:
Dear My Childless Friends